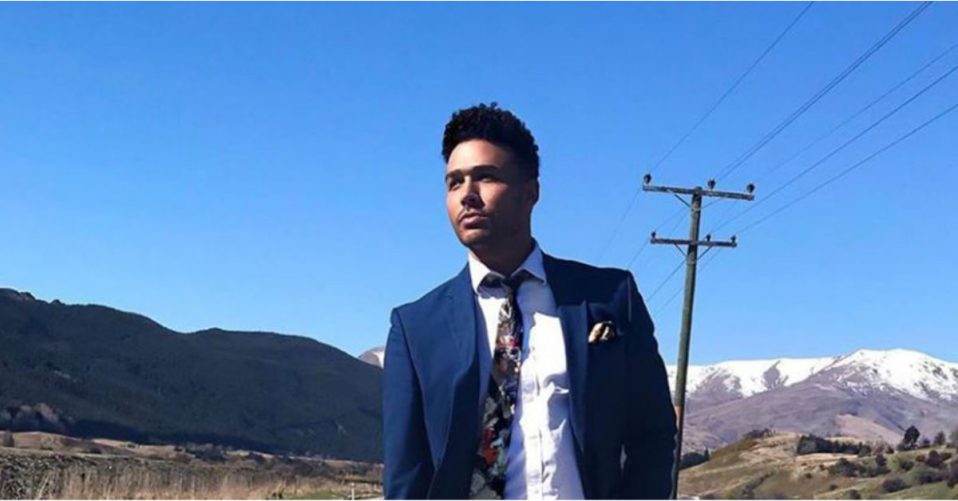 Barry Conrad’s love for music has been lifelong: he had a Dad who played guitar and loved to sing, and a Mum who recorded worship albums with her church choir.

For a number of years he was part of New Zealand hip-hop group Jireh, who moved to Australia to ‘make it big’, but eventually disbanded when the sea change wasn’t as fruitful as they’d hoped.

In 2013 he appeared on X Factor, which to some was his ‘big break’, but by then Barry had already been on Australian Idol, scored a role in Australian film The Sapphires, and collected some young fans through Power Rangers Ninja Storm.

In the years since, he’s made his musical debut in the Australia production of Broadway’s VIOLET, performed in arena spectaculars for Hairspray and Grease, had a lead role in the Nelson Mandela biographical musical Madiba, and this year landed his first network television role in Neighbours. To get consistent work in the entertainment industry is impressive, but Barry admits it’s required a lot of persistence, and relying on his innate drive.

“Ever since I was a child, I’ve always had this sort of resilience,” said Barry. “I’ve always believed there’s something more, and had that ‘faith’ that things would work out; but I’ve also never been afraid of working hard. And it’s a quality that I’m proud of having.

“It doesn’t mean I don’t have days where I ask, ‘Can I do this?’ You constantly feel that, regardless of where you’re at. ‘Can I do that again?’ ‘Can I hit that note?’ ‘Can I write that song?’ But that’s what keeps me going.”

The Curse of Comparison Above: Barry played a lead role in ‘Madiba’, the musical

One of the more challenging times in Barry career, was after his stint on Australian Idol. The shows format was relatively new, and judges critiqued both his vocal ability and physical appearance, saying he was ‘a bit too pretty’ and comparing him to Season 1 winner Guy Sebastian.

“After [Australian Idol] I vowed I’d never do something like that again,’ said Barry. “I was a much different person to who I am now; I was a lot more of a people pleaser, a perfectionist and a lot more self-conscious, so that experience made me so anxious.

“The lyric, ‘If you never try you’ll never know just what you’re worth’, made me pull over and call the producers… the rest is history.”

“I would go to a movie and leave before the light came up, constantly thinking people would be watching me and wondering what they were going to think. It really ruled me, and after that I took a lot of time to defragment and [find resolve].”

When the opportunity to go on X Factor came up, Barry was still hesitant and skipped his first audition—until a Coldplay song and the advice of a loved mentor convinced him to have a second go.

“Before I lost my ‘second mum’ Audrey to cancer, she’d said ‘Go for it. You have one life, make the most of it’,” Barry recalled.

“One night I was driving home from the studio and the Coldplay song ‘Fix You’ came on. I’ve heard that song a thousand times, but the lyric, ‘If you never try you’ll never know just what you’re worth’ made me pull over and call the producers and ask if they could still see me. They flew me out to the last shoot in Melbourne, and the rest is history.”

The Grounding Effect of a Brush with Death Now, Barry finds himself in a much more grounded state, and is less affected by the nuances of the industry around him. He credits that to his ‘second mum’, but also to his own brush with life-threatening illness.

In a recent interview Barry said, “I went to one of my favourite cafes for a coffee, and as soon as I walked out, I felt the most intense pain I’ve ever felt in my life shoot up my back.

“It felt like someone was stabbing me and I literally felt like I was dying. What had actually happened was a blot clot had formed in my leg [after surgery] and shot up to my right lung, killing off half of my lung.

“When I came close to losing my life, I had to rehab everything… I learned there’s really no guarantees. It informs the way I live, it’s changed everything.”

“It sucks that it takes things like that to make people embrace life,” Barry said, “but it really does… For me, losing Audrey was the first catalyst for that, and then when I came close to [losing my life] I had to rehab everything… I learned there’s really no guarantees, and it informs the way I live, it’s changed everything.”

It’s led Barry to be more determined about his work, and also to check in on the people around him more intentionally.

As an RUOK Day ambassador Barry said, “Depression and suicide rates are at an all-time high in the entertainment industry, and every single one of my peers that I [talk about mental health] with, will agree that perception is so important.

“People look at [you on] Instagram, or TV or magazines, and can think that everything is great because you’re ‘succeeding’. But that is your job, it’s not who you are. It’s really important to ask, ‘How are you?’ and not assume they’re okay because they got the gig.”

At this point in the journey, Barry’s advice to others is to “find other things in your life that make you happy, and not just what your work does [for you], because if you just put everything into your work, it can become so indescribably consuming.”

Barry’s latest release, Have Yourself a Merry Little Christmas, is out now on Youtube and your favourite music streaming platforms.

Barry Conrad’s love for music has been lifelong: he had a Dad who played guitar and loved to sing, and a Mum who recorded worship albums with her church choir.

END_OF_DOCUMENT_TOKEN_TO_BE_REPLACED

Your ticket for the: Barry Conrad: How a Brush with Death Changed His Outlook on Showbiz and Life