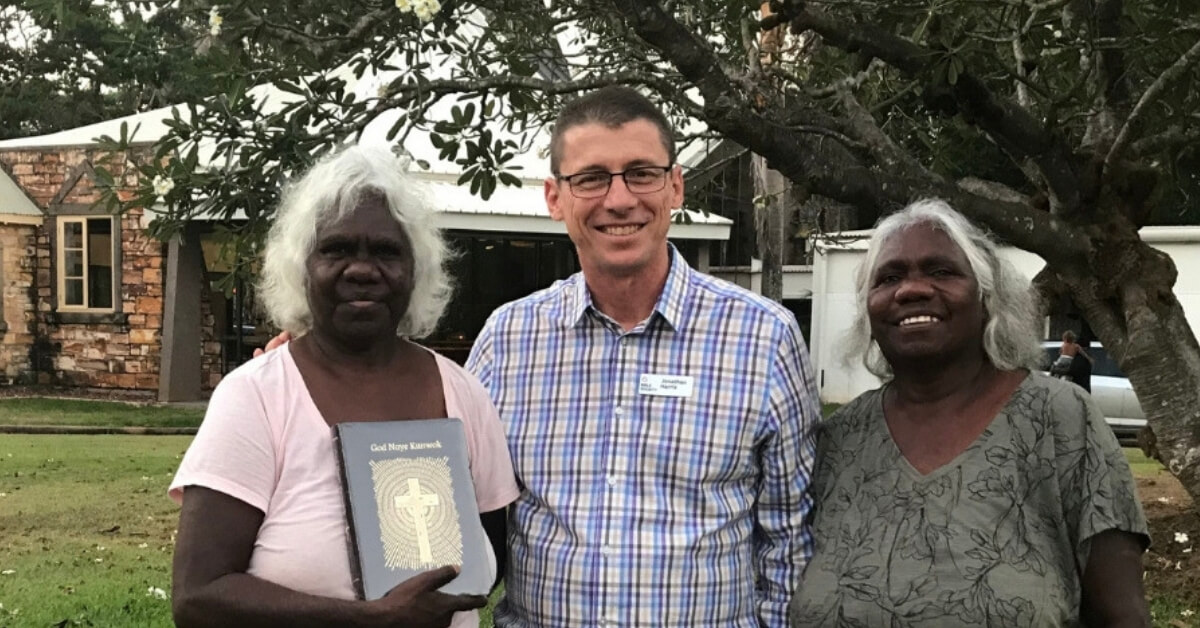 A trip over time and distance

One person who is continuing a family tradition of opening the door to faith for Indigenous people is Jonathan Harris, Bible Society’s National Manager of Church and Community Relations.

According to Google Maps, the trip from Barraba, in northern New South Wales to Gunbalanya (formerly known as Oenpelli), in the Top End, should take about 40 hours of continuous driving. But when Jonathan arrived in the remote Northern Territory Indigenous community from his family farm in NSW, he was completing a family journey that began more than 80 years ago.

Jonathan’s grandmother, Nell Harris, spent 36 years as a Church Missionary Society (CMS) missionary in the Northern Territory. In an era when colonial thinking meant that Indigenous people were often forced to forget their traditional language and speak only English, Nell was ahead of her time.

In the 1930s, Nell joined forces with Kunwinjku translators Rachel and Hannah to bring the translation of St Mark’s Gospel into the ‘language of the heart’. Sitting under the shade of a bark hut, the women would translate five verses a day.

80 years in the making

This publication has been the culmination of decades of translation work by local Kunwinjku speakers with the support of CMS missionaries and the Anglican Diocese of the Northern Territory.

Left: Notebook with the translation of the Gospel of Mark done by Nell Harris in the 1930’s. Right Dick and Nell Harris Christian Mission Society missionaries.

Little did Nell know that one day her work would become the Kunwinjku Shorter Bible, printed in China, shipped to Sydney and driven by her grandson to the community who had waited for eight decades for the Bible to ‘return home’.

“The Bible Society has been privileged to work collaboratively with our mission partners over many years to ensure the Kuwninjku people of west Arnhem Land have a New Testament in their heart language,” Jonathan Harris says. 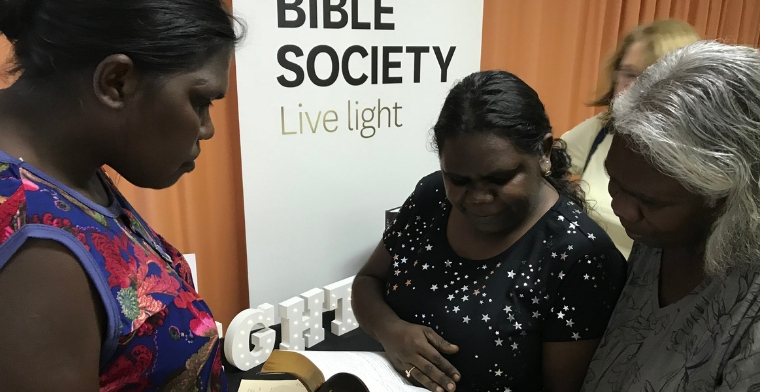 Above: Women from Gunbalanya see the Kunwinjku full New Testament for the first time

For Jonathan Harris and members of the Gunbalanya Christian community, the delivery of the Bibles represents more than just a tribute to the work of their ancestors. As local, Hagar Nadjamerrek says, it is a symbol of hope.

“This is what we need our kids to learn and to understand and to share the good news amongst our people.” Not only in this community but sharing out to other communities, other families. This is our future.” Hagar says.

Currently, there’s only one full Bible in an Aboriginal language. This means thousands of Christians are missing out on God’s word. To help Indigenous Christians share the Bible their way, in their words go here. For further details about Bible Society Australia, visit their website.

Article supplied with thanks to Open House.

About the Author: Anne is the producer of Open House – a weekly three-hour live talkback radio show exploring life, faith and hope from a Christian perspective.

Your ticket for the: Indigenous Bible Opens Door to Faith for Indigenous Australians