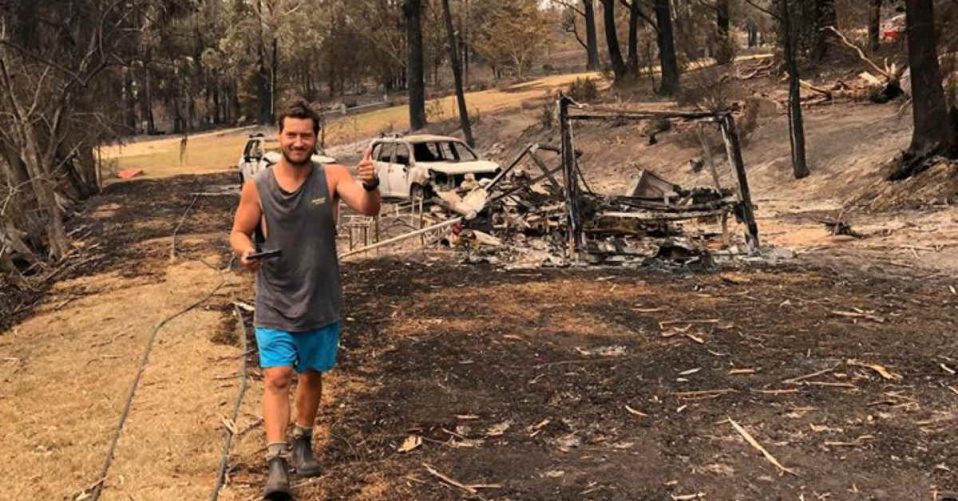 Dad and father-of-four Andrew Flaxman is lucky – or blessed – to be alive, along with his wife, four kids and his sister’s family of five – who were all rescued by boat in the middle of a firestorm on New Year’s Eve.

Andrew spoke about the terrifying minutes at Lake Conjola on the NSW South Coast, when he realised they were surrounded by a wall of fire on all sides, with no way of escape—when a “hero” came out of nowhere on a boat to save them.

“On New Years Eve they said ‘There’s fires coming, but don’t worry, they’ll be 50 or 100 k’s away, and the wind will turn and it’s going to be fine,” Andrew explained.

“We were out on the lake playing with our kids, and at 11:59am, we could see the fires over the hill, starting to rage and you could see the glow and the smoke. And at 12:09, we were on a boat fleeing across the lake for our lives. Within ten minutes we were surrounded by fire. There was darkness, there was smoke, you could hear the fire roaring behind us.

“The situation escalated so quickly that it went from us taking selfies, to ‘Oh my Lord, there’s fire all around.”

A Humble Rescuer on a Boat 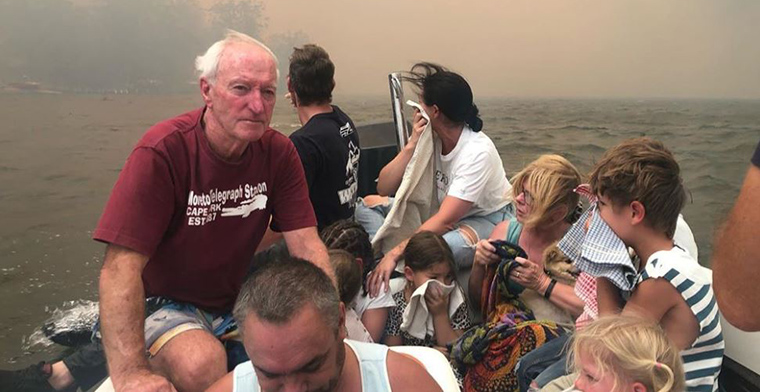 Calm in a crisis: Michael Cripps helped everyone on the boat to stay calm, while his son Brett (front, with white singlet), driving the boat, refused to be called a hero.

Andrew’s wife Jillie gathered the children together close to the water and kept them calm, and that was when salvation came, in the form of a stranger on the water.

“If he hadn’t turned up… I don’t want to think what would’ve happened.”

“It happened so quickly. We went from having a great day to five minutes later surrounded by fire, and fleeing for our lives.”

With 17 people crammed aboard, the small boat stayed in the middle of Lake Conjola where they were safe from the flames, for the next three hours. Brett’s father Michael Cripps, in his 70s, was a quiet, stabilising presence, who set the tone on the boat and helped everyone else to remain calm.

It’s a remarkable effort, considering that Michael and his son Brett had just watched their own house burn to the ground only moments before the rescue. 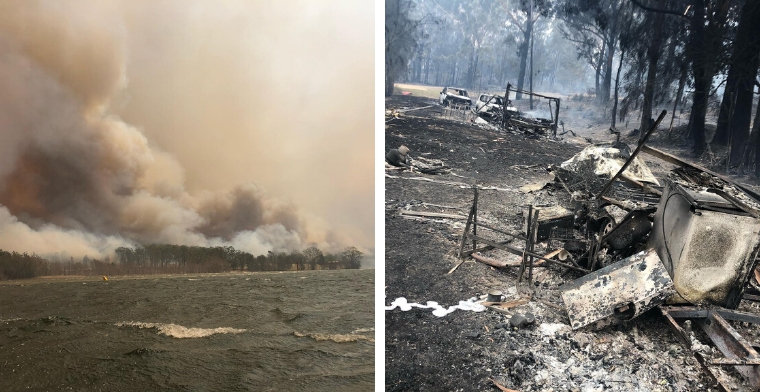 Above: (L) A photo of the fire taken from the boat, (R) the wreckage of the Flaxmans’ cars.

Andrew and his wife Jillie, who work in pastoral ministry at C3 Church in Tuggerah on the NSW Central Coast, lost their car and caravan and many possessions, but are simply grateful to have everyone alive.

“So many people said ‘we feel so sorry for you, you lost all your possessions’, and we stopped them and said ‘We didn’t lose anything, today we actually won’”, said Andrew. “’We saved our kids, we saved our lives. All this stuff we have is worth nothing compared to the safety of your loved ones.’”

“Houses burnt to the ground. So a lot of people lost a lot more than we did. I actually came back and saw everything burnt and gone and felt blessed that I could look at my kids and they were there.”

Over the next couple of days, the local community of Lake Conjola surrounded Andrew and his family with love, fed and clothed them, the local caravan park putting them up in a deluxe cabin on the beach. “It was phenomenal,” said Andrew. 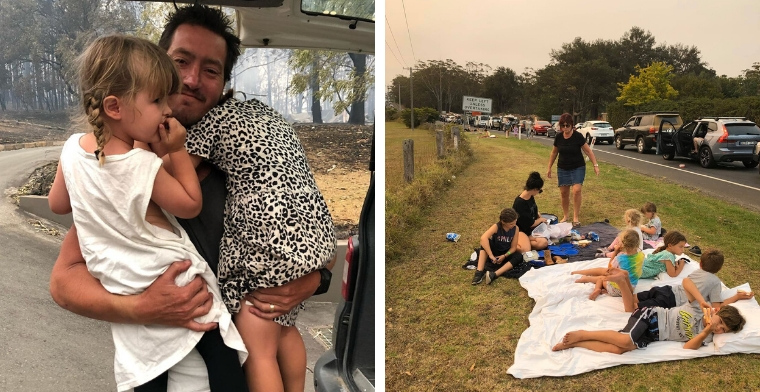 Above: Tired, but safe. A relieved Andrew with two of his children, and (R) the family picnicking on the side of the road during a 10-hour traffic jam.

The family’s trip home, although long (24 hours!) was “amazing”, said Andrew, when during a 10-hour holdup on the freeway, generous locals came out offering food and water and looking after them up until 1am.

“People went above and beyond to make sure strangers were doing okay in this crisis time of need,” Andrew said. “It was so beautiful to see everyone come together and work together in community. It was amazing.”

Having been through the experience, Andrew’s advice to anyone facing a similar crisis, is to put your family first, and remember that possessions are nothing compared to the value of your loved ones.

Brett Cripps told Fairfax that he was “not a hero” and was “just in the right place at the right time”. “It wasn’t just me, there were a lot of local residents with boats and jet skis helping people out. I just happened to be in the spot,” he said. “I just want to emphasise that the community banded together.”

But Andrew has swapped numbers with Mr Cripps with plans to stay in touch, and hopes that his humble rescuer can be honoured somehow.

“I would like to think that somehow he would get some bravery award,” he said. “There’s no doubt in my mind he saved 11 people – two families – who, I think if he didn’t pop himself where he was at that one moment, potentially wouldn’t be here.”

Your ticket for the: “It Happened So Fast” – How a Pastor and His Family were Saved in a Firestorm