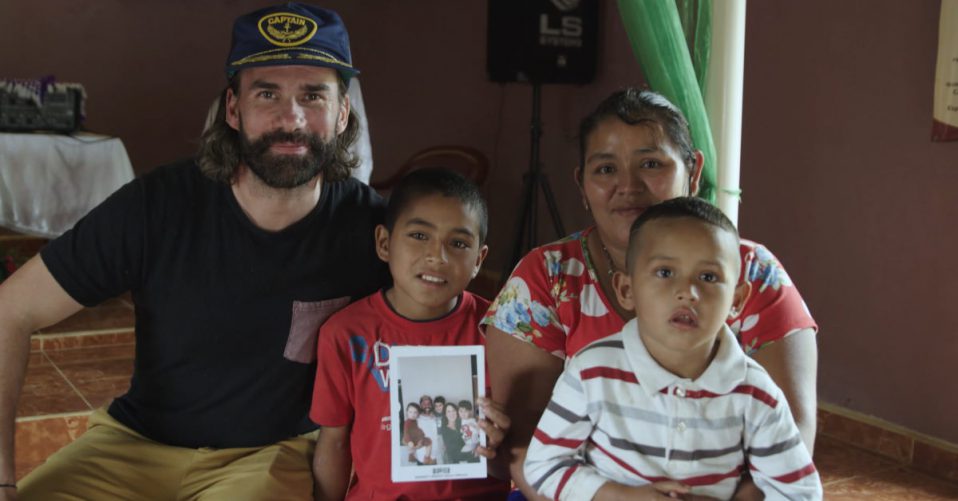 On the eve of their sell-out Australian tour, Rend Collective’s Gareth Gilkeson opened up about being one of the last to be chosen as a Child Sponsor.

Gareth Gilkeson claims he is not a sentimental guy. However he does admit to crying emotionally during a Sponsorship Choosing Party in Honduras.

Gareth explains, “Late last year I travelled to Central America with World Vision Australia. I met Honduran leaders and discussed the issues that their community were struggling with; drought, land rights, poverty and exploitation. One of the big issues I learnt about was the abuse and exploitation of people already impacted by poverty.”

“This was the case in the first community we visited. Wealthy landowners rented land to struggling farmers. If the farmers had a bad year, they still had to pay the full rate. If they had a good year, the price paid by the wholesaler did little to alleviate their poverty.”

“There was exploitation at every turn. It made me so mad.”

The Emotional Connection in The Irishman

As an Irish man, Gareth says there was something in him that really connected with that sense of being the underdog, and being abused or used by a bigger person.

Despite all the problems, there were good news stories too. In the second community Gareth visited, World Vision had been at work there for 10 years. The story of this community was vastly different.

A functional irrigation system meant this community’s harvest had risen from a hundred tomatoes two years ago, to a crop of thousands.

World Vision helped to connect these farmers with an international supermarket chain so they could get a fair price and scale up. This sort of success meant more local jobs.

It wasn’t just adults’ lives that were changing for the better – children always benefit from their parents’ windfalls. These children weren’t looking at the older people and thinking, “there’s no hope”.

‘World Vision has flipped the script and put the power to choose in the hands of the children.’

Gareth says, “For me, these experiences felt like the real practical love of God.”

And for the first time, World Vision has flipped the script and put the power to choose in the hands of the children.

For the past 70 years, the power has been in the hands of the sponsors. They have picked their sponsor children from a selection of pictures. But the tables have now turned – children do the choosing. They select their sponsor in a fitting new program called “Chosen”.

Gareth shared, “Chosen resonated with me. People experiencing poverty are equals, fellow humans who have just been dealt a different hand to me. They should not be pitied or helped but empowered and supported.”

“In an environment when so much is taken from children – even down to the ability to make decisions – they are restored the basic right of choice.”

“It was so moving to see them walk into the room and observe who they connected with. Suddenly it’s like, “Wow, somebody has decided that I’m important enough to choose!” It’s great to see the kids go in and look up at the pictures.”

However The Chosen Party was a reality check for Gareth’s ego, as he openly confesses that he was in the last five to be chosen!

This will be the band’s first trip to Australia.

Gareth explained, “I’ve been invited numerous times but visited zero times. It just kept falling through with cancelled festivals and events. So, last year I sat everybody down and told them: I am fed up with waiting, we are going, so let’s figure it out”.

Because they are an independent band, they’re not part of a large church network. So, the whole financial risk of touring sat on their shoulders. Thankfully, the overwhelming response to the news meant that the entire tour sold out.

The band members say they will now put Australia on the list of ‘once-every-two-years’ countries.

About the author: Kim Wilkinson is a media and communications professional who specialises in building community and valuable relationships.

On the eve of their sell-out Australian tour, Rend Collective’s Gareth Gilkeson opened up about being one of the last to be chosen as a Child Sponsor. END_OF_DOCUMENT_TOKEN_TO_BE_REPLACED

Your ticket for the: Rend Collective Band Leader Chosen by Sponsor Child