The ‘Great Untruth’ That Could End Our Democracy 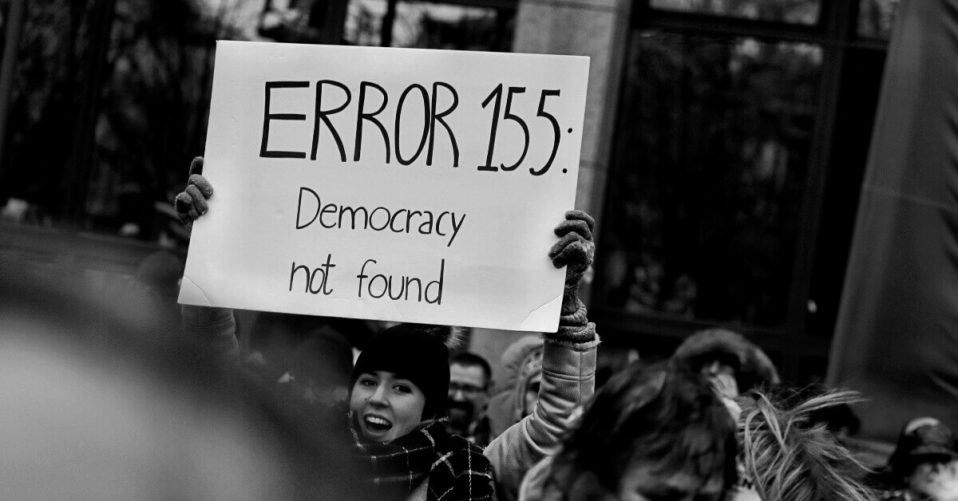 This ‘great untruth’ is leading to the polarisation of our community. It’s eroding the stability of civil society. And if left unchecked, it could spell the end of our democracy.

Speaking of this danger, secular Psychologist, author, and New York University professor Jonathan Haidt recently gave a warning about American democracy (although it applies to many other democracies, including ours):

‘I think there is a very good chance … that in the next 30 years we will have a catastrophic failure of [American] democracy.’

The “great untruth” that’s leading many democracies down this path is not new. It’s been around for a long time.

So what is this “great untruth”?

Seeing life as a battle between good people and evil people.

Authors Jonathan Haidt and Greg Lukianoff expose this dangerous ‘untruth’ in their recent book, ‘The Coddling of the American Mind – How Good Intentions and Bad Ideas are Setting Up a Generation for Failure’. It’s an untruth that rears its ugly head during heated cultural disagreements. They write:

‘[This untruth has] flowered on many college campuses [and] now extends from the campus into the corporate world and the public square, including national politics. They are also spreading outward from American universities to universities throughout the English-speaking world…Anyone who cares about young people, education, or democracy should be concerned about these trends.’

It’s an ominous warning. But it’s hard disagree with. I’ve seen the effects of this great untruth many times, and especially online.

I’ve commentated on many areas of cultural disagreement on this blog: from safe-schools, to same-sex marriage, to abortion. All contentious, emotive issues. And as I’ve argued for a classically Christian position on these issues, I’ve received increasingly angry pushback:

Not only have my views been judged as immoral , but my motives have also been judged: I’m seen to be motivated by hate, with the intent of wanting to harm other people.

In other words, they assume the best motives in themselves, and the worst motives in their political/social opponents. They’re the good guys, while the opposing side is evil – with no nuance or shades of grey. And this black and white view of society is affecting mainstream political discourse. As Journalist Janet Albrechtson points out:

‘[There is research] that has found, on average, Republicans and Democrats suffer from a level of motive attribution asymmetry comparable with Palestinians and Israelis who were surveyed over their regional conflict – “each side thinks it is driven by benevolence, while the other is evil and motivated by hatred – and is therefore the enemy whom on cannot negotiate or compromise.”

(Of course, there are situations – historically, and today –  where one side clearly is driven by hatred, while the other side is driven by love. But we shouldn’t assume this without any evidence.)

While in my experience I’ve mostly seen this behaviour from the secular Left, I know my heart well enough to see how I’ve fallen into believing this great untruth – especially in heated online arguments. I’m as susceptible to this great untruth as anyone else, and the fallout is destructive.

The Fallout from The Great Untruth

There is serious fallout when growing segments of the electorate believe this great untruth. Here are 3 that come to mind:

1) It Leads to Contempt Toward Your Opponents

Contempt says you don’t care about the other person, that they are worthless. Contempt makes no room for compromise or the search for common ground.

Contempt says that people with different views (especially views deemed politically incorrect) are so lacking in moral worth that they should not be heard.

2) Trying to Shut down and Publicly Shame Opponents

Not least, to demonstrate their ‘virtue’ to our own tribe.

A classic example of public shaming was the online targeting of Coopers beer in 2017. The Bible society of Australia put out an innocuous video put showing a friendly discussion about same sex marriage.

And within 24 hours, Cooper brewery (whose light beer was featured in the Bible Society video) received a serious social media pile-on from activists and pro-SSM pubs.

While there was a distinct element of public shaming toward those seen to merely support a politically incorrect cause, there was also an element of virtue signalling.

‘Insults, invective and supposedly gotcha moments are hurled at the opposition from behind a social media barricade. Occasionally, someone breaks free from the ranks of civility to show their contempt for the deplorables, or for the social justice warriors, by “calling out” their behaviour…’

‘You might assume that those hurling insults via social media are trying to change the status quo. In fact, I suspect the real purpose is to secure the support of their tribe. This is particularly the case with the social media pile-on, in which a perceived transgression draws out those seeking the approval of others by pathetically piling on the transgressor.’

Having experienced at least one twitter pile-on, I can tell you it’s not much fun. But the damage isn’t merely in terms of a person or company’s reputation.

As bad as the reputational damage caused by social media ‘piling-on’, what’s even worse is the bypassing of civil dialogue, which is vital to a democratic society.

3) There is No Engagment with the Argument of the Other Side.

(And why should there be? They’re just ‘hate-filled bigots’).

‘In the US, one in six Americans have stopped talking to a family member or a close friend since the 2016 presidential election of Donald Trump. And their parents now worry far more about their children marrying someone with different political views.’

When we view the other side with contempt we’re unlikely to want to hear what they’ve got to say. When we see the other side as driven by hate, we don’t want to listen (let alone understand) their point of view. We just want to disengage, and throw stones at them on social media.

But this disengaging won’t end well for our society. And Christians should be concerned about this, as real people are harmed by the effects of this great untruth.

So what can be done?

While Christians are often on the receiving end of contempt because of our views, we can still influence others – even our opponents – by how we engage. And the Bible gives us the spiritual and intellectual resources to engage well:

The Way Out of This Great Untruth

1) Don’t Pay Back Contempt With Contempt

But remember your opponents are made in God’s image.

When someone is contemptuous of you, it’s almost natural to return in kind.

And yet, we’ll be less likely return contempt for contempt if we remember that those opposing us are also God’s image bearers. for whom Christ Jesus shed his blood. They’re precious to him.

And it’s not our place to tear other image bearers down. As James 3:9-10 warns us:

‘With [our tongues] we bless our Lord and Father, and with it we curse people who are made in God’s image. From the same mouth come blessing and cursing. My brothers and sisters, this should not be so.’

There is no room for self-righteousness.

The great untruth has power because we can delude ourselves to think that if the other person is bad, then we – their opponents – must be good. And we can revel in our self-righteousness, and tear people down just like the Pharisees did in Jesus’ day (and to Jesus!).

But the powerful antidote is to remember that we’re just as worthy of God’s condemnation as anyone else: it’s only by God’s mercy that we’re saved. And as we’ve received mercy from God, so we should show mercy to others – even our opponents (cf. 1 Peter 3:9-13).

3) Assume Your Opponent is Driven By Good Motives

Unless it becomes clear that they’re not.

Most (if not all) anti-Christian opponents in this country are acting out of good motives – even if they are often misguided and wrong in their particular views. Wanting women’s equality, or preventing bullying of gay kids are good motives in and of themselves (even though their solutions might be damaging). T

As mentioned, there are situations where our opponents are driven by hatred. But let’s not assume this, but base any such conclusion on evidence.

If we assume good motives, we’ll be more likely to engage their arguments, rather than showing contempt toward them as people.

4) Engage Your Opponent’s Arguments with Gentleness

By first understanding what they’re saying.

The apostle Paul’s advice to Timothy is much needed in our outrage driven social media age:

‘The Lord’s servant must not be quarrelsome but kind to everyone, able to teach, patiently enduring evil, correcting his opponents with gentleness. God may perhaps grant them repentance leading to a knowledge of the truth.’

Gentleness – now there’s something that’s increasingly rare in the social media world these days. And yet Christians are commanded by God to argue with gentleness.

But not only is a gentle tone important, so is intellectual fairness. As theologian David Bentley Hart argues:

‘An honourable critic of any idea will always seek out and try to understand the strongest formulations of that idea, as well as the most pervasive arguments in its favour, before attempting its refutation.’

To put it another way, if we’re to love our neighbour – even if they oppose us – the least we can and must do is first understand their position, and then engage – but gently.

This ‘True’ Approach May Change The Debate

(Or at least the tone of debates)

If Christians consistently engaged in debate in the above ways, we might well influence others for good. As we show compassion and respect toward those opposing us, they’re more likely to be respectful, and open to what we’ve got to say.

The future of civil society – and our democracy may well depend on this.

Your ticket for the: The ‘Great Untruth’ That Could End Our Democracy

The ‘Great Untruth’ That Could End Our Democracy