Banjo Paterson’s Forgotten ANZAC Role: One of the Least-Known Parts of His Life 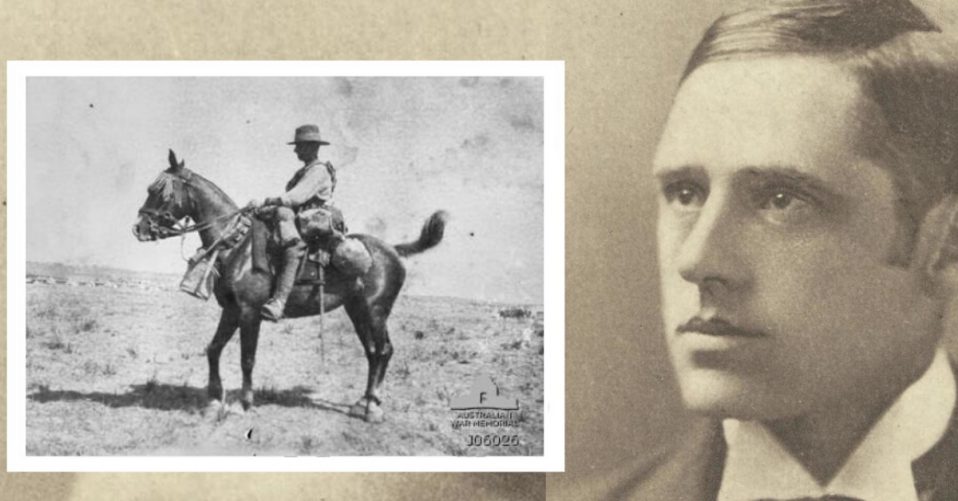 Those tough Aussie horses, broken in and trained for the exact task before them, struggled in the soft, burning Middle Eastern sand, their fetlocks sinking deep in the desert hills.

The dust of their efforts was a rising column in the still, searing air. The relentless blazing sun seemed intent on delivering one message: ‘Go home, Aussie. This place is for camels, not horses’.

It was the Sinai Desert, 1917—more than one hundred years ago.

After the evacuation at Gallipoli, Anzac troops were sent back to Egypt, from where they were ordered to liberate of the Holy Land, then ruled by the sultan of the Ottoman Empire. Reunited with their horses, the Light Horsemen set off across the desert, their emu plumes waving.

“They flicked through their military-issue Bibles, awed with the thought that they were following in the footsteps of Moses, Abraham and Jesus.”

A group of bushmen from Queensland soon had a solution to that soft-sand problem. In anticipation of trench warfare like that in Gallipoli and France, some chicken wire had been sent to prevent sand from sliding and caving in any defences. But the bushies knew it could be used to build a road. Soon the horses and troops with their 30 kg of kit were using this unusual ‘highway through the desert’.

Many were conscious, as they travelled, that this was the route that the Christ Child must have taken on returning from Egypt after escaping the murderous King Herod. They flicked through their military-issue Bibles, awed with the thought that they were following in the footsteps of Moses, Abraham and Jesus.

Looking back, we can see these Aussies, too were riding into history – on their faithful Walers. The great horses had been brought out on troopships from Australia and corralled at Heliopolis in Egypt. Every farmer had to donate a horse to the war effort and, as those breaking them in were to learn, it was rarely the best beast.

How Banjo Paterson Helped in the Lighthorsemens’ Success 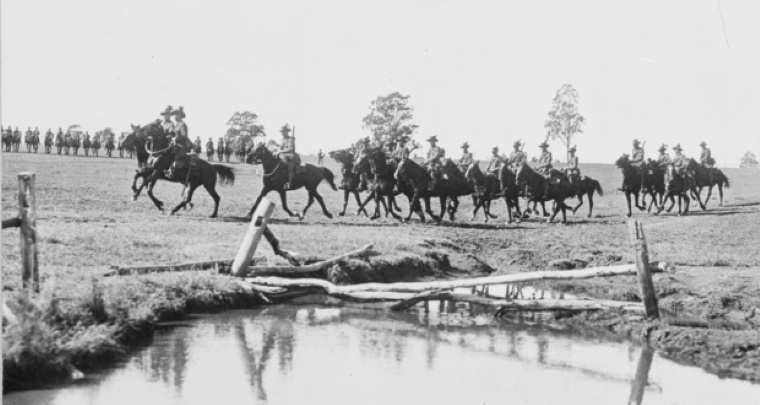 Leading the team of horsebreakers that broke in the feral brumbies – those famous ‘wild bush horses’ – as well as farmer’s nags and the occasional decent pony, was a man renowned throughout the English-speaking world for his poetry: AB ‘Banjo’ Paterson, best-known for his works, The Man From Snowy River and Waltzing Matilda.

While many teenagers had added a few years to their age to register for active service, Banjo had dropped a couple from his.

He’d gone to London, hoping to be sent as a journalist to the Western Front in Flanders, but was unable to obtain a position. He drove an ambulance in France but, on learning of the formation of the Australian Remount Squadron in the Middle East, he hurried home.

“It was the behind-the-scenes efforts of these world-class trainers that made possible the famous Light Horse charge at Beersheba on 31 October 1917.”

Commissioned in the Australian Imperial Force, he was eventually sent to Moascar in Egypt to command a motley group of men including buckjumpers, circus performers, farriers and veterinarians. They broke in thousands of horses and mules, shod them, fed them, groomed them, raced them, trained them for battle conditions and kept the best of them for the ordinary front-line trooper. This was despite, as Paterson noted, the constant efforts of officers to secure the best mounts for themselves.

It was the behind-the-scenes efforts of these world-class trainers that made possible the famous Light Horse charge at Beersheba on 31 October 1917. As one trooper quipped, in typical laconic Aussie style, the success of the charge wasn’t about the heroism of the troops but that the men couldn’t hold the desperately thirsty horses back once they smelled the water.

The beginning of the liberation of the land God had promised to Abraham wasn’t so much about a single charge as the coordinated efforts of many units working together.

Anzacs Who Carried the Bible With Them 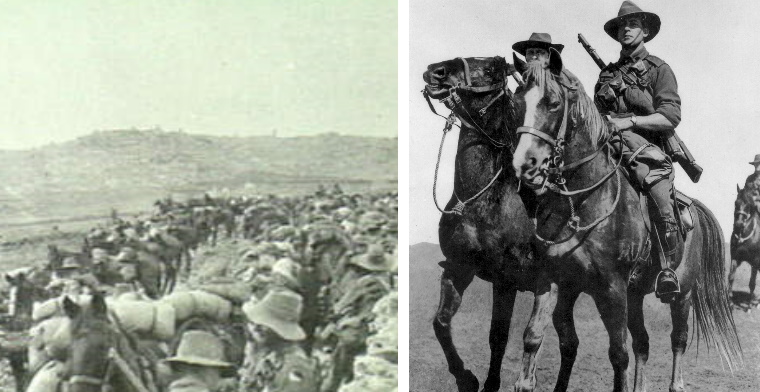 Above: (L) The 3rd Light Horse Regiment, AIF, at Palestine, with Bethlehem in the background, 1918/19. Photo: Australian War Memorial. (R) Australian light horsemen on their walers before leaving Australia, November 1914. Trooper William Harry Rankin Woods at front, of the 1st Light Horse Regiment, would be one of the first light horsemen killed at Gallipoli, dying from his wounds on May 15, 1915. Photo: AWM.

The Anzacs were conscious the wells of Beersheba featured strongly in Biblical history. The famous khaki New Testament ‘On Active Service’ was issued to the Australian Army; it came in two different blue hues for the Navy and Air Force. More than one million copies were carried to war in shirt pockets.

‘Banjo’ was no stranger to the Bible. His mother, Rose, ensured that the Bible and nightly prayers were the family’s strongest companions. His mother was very keen for her children to understand how the Scriptures emphasised concern for others as well as good manners and respect for all.

Why Didn’t Banjo Paterson Write Poems About the Lighthorse? 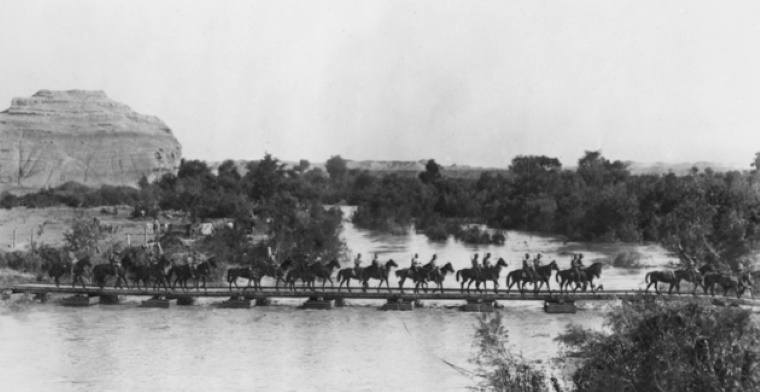 Above: The 5th Australian Light Horse Regiment crossing the River Jordan on a pontoon bridge between Jersualem and Moab, at Ghoraniye, April 1918. Photo: Australia War Memorial.

‘Banjo’ Paterson is immortalised on our ten dollar note. Yet his role in the Anzac battalions is one of the least-known parts of his life.

It has slipped to obscurity, perhaps because – mysteriously – he never wrote a poem about the great Walers he worked so hard to train.

Or if he did, none of those writings have survived.

Perhaps he found their loyalty and faithfulness too heart-breaking to commemorate once the decision was made to leave all but one of the horses behind after the war was over. For many Aussies, the unthinkable came to pass when they had to leave their ‘best mate’ behind.

‘Banjo’, however, did produce some poems during the war. They’re not nearly as famous as his earlier ballads, but the patriotism and larrikin spirit of the Aussie bushman shines through.

One such poem was Boots, written while he was in Egypt somewhere near 1917. The poem is found in From Gallipoli to Gaza: The Desert Poets of World War I, along with other wartime verses by Banjo Paterson. It includes works by many other poets, as well as stories of the circumstances in which they were written.

Article supplied by Diduno – an organisation dedicated to educating and informing the next generation of Australians of our Christian heritage.

Your ticket for the: Banjo Paterson’s Forgotten ANZAC Role: One of the Least-Known Parts of His Life

Banjo Paterson’s Forgotten ANZAC Role: One of the Least-Known Parts of His Life