U2 – The Greatest Christian Band That Never Was 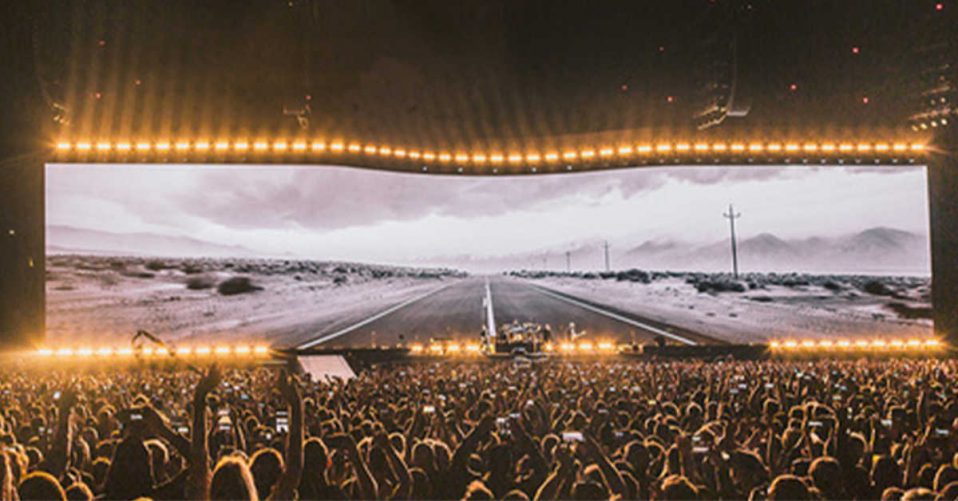 As Irish supergroup U2 kick off the Australian leg of their Joshua Tree Tour we ask – are they the greatest Christian band that never was?

U2 have largely avoided being pigeon-holed as a Christian band, even though their faith has been writ large in their lyrics.

It’s probably no surprise the band has kept organised religion at arms length over their 40 year career.  The Ireland that Bono, The Edge, Adam Clayton and Larry Mullen Jr grew up in was deeply divided along religious and sectarian lines.  Clearly what type of church you attended was of little consequence to the four boys, with Bono coming from a mixed Catholic and Anglican family, Edge and Adam Clayton being raised Protestant, and Larry who was born in to a strong Irish-Catholic family. 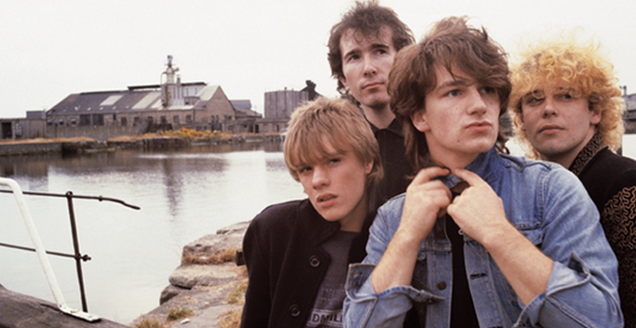 In the very early 80’s U2 had released Boy (1980) and October (1981), and were involved in a non-denominational church called Shalom.  But many in the Dublin congregation couldn’t marry the idea of the boys attending church and also being involved in the rock scene.

The Edge told music journalist Bill Flanagan that a number of church members wanted them to quit the band.

“We were getting a lot of people in our ear saying: This is impossible, you guys are Christians. You can’t be in a band. It’s a contradiction and you have to go one way or the other.” [1]

Although U2 took this proposal seriously enough to put the band on hiatus for 2 weeks, history ultimately shows that they carried on with their music and ditched the church.

But not their faith.

On the 1983 album ‘War’ the group took for the first time a political stance.  ‘New Year’s Day’ was the first single released from the album and was written in support of the Polish Solidarity Movement.

The iconic ‘Sunday Bloody Sunday’ told the story of the 1972 Bloody Sunday massacre in Derry, Northern Ireland.  28 unarmed civilians were shot by British troops with 14 of those being killed.

But it was on the album’s final song ‘40’ that Bono took inspiration from a different source.  During the sessions for ‘War’ Bono opened his Bible to the Psalms and set the 40th Psalm to the track that Edge and Larry were working on.  For years the band would close their shows with this song, walking off one at a time, until only the audience was left singing.

It wasn’t until a few years later where U2’s mix of faith and political belligerence would combine to propel the band into super group territory.

1987’s ‘The Joshua Tree’ took a swipe at the Reagan administration in the US, as well as their interference in Central America.  Having visited El Salvador in 1986, Bono returned with the lyrics for ‘Bullet the Blue Sky’ and ‘Mothers of the Disappeared’. 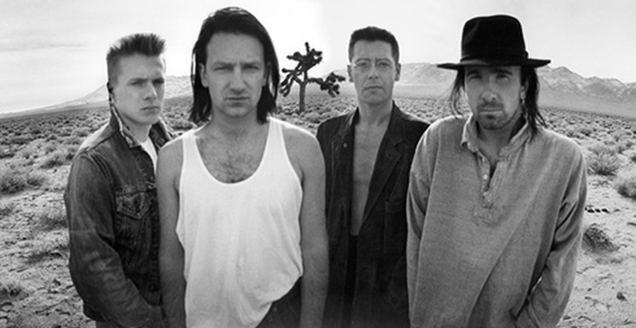 U2, Mojave Desert 1986. This shot became the inner sleeve of The Joshua Tree album.

However it was spiritual themes that drove the singles that were released to radio.  On ‘With Or Without You’ Bono struggles with elements of faith – succumbing to a saviour vs going it alone.  The second line has a visual reference to ‘the thorn twist in your side’ which highlights who the song is written to.

‘Where The Streets Have No Name’ was a response to the sectarian nature of Northern Ireland, where someone’s address would identify them as either Catholic or Protestant.  It was also formulated after Bono and his wife visited an Ethiopian tent city whilst working with World Vision.

Propaganda was U2’s official fan club magazine and Bono offered up a few thoughts to fans in early 1987.

“An interesting story that somebody told me once, is that in Belfast, by what street somebody lives on you can tell not only their religion, but tell how much money they’re making — literally by which side of the road they live on, because the further you go up the hill the more expensive the houses become. You can almost tell what the people are earning by the name of the street they live on and what side of the street they live on. That said something to me, and so I started writing about a place where the streets have no name.” [2]

Many Christian fans have often associated the song with heaven in a general sense, but Beth Maynard of the blog site U2 Sermons believes the song is deeper than that.

“To say ‘Streets’ is about heaven in that very limited and popular-piety sense sells a spacious song way short. But it’s a very different matter to view that song as expounding Jesus’ much richer, more complex, and more paradoxical proclamation of the Kingdom of God”. [3]

On ‘I Still Haven’t Found What I’m Looking For’ Bono laments that even though he believes in the Kingdom Come, and that his cross of shame has been carried, he is still hungry for more.

Bono himself has referred to the song as ‘a gospel song with a restless spirit.’

In the 1988 documentary ‘Rattle & Hum’ U2 sang the song with the gospel choir New Voices of Freedom.

Claudette Bell arranged the gospel version and told the US’s National Public Radio that the Irish superstars were inspired by their version, and that the theme of searching is a universal one.

“It could be today — where people are, you know, kind of fighting for space and knocking people down for whatever reason.  You have a lot of walls to scale and mountains to climb … and you just want to be with something that’s good.”

So if you’re lucky enough to be seeing U2 as they perform ‘The Joshua Tree’ album live across Australia, listen that little bit closer to the lyrics.  You might just discover a depth of soul and substance that you’d previously missed.

Article supplied with thanks to 96five.

About the author: Justin Rouillon is a senior producer and content creator who works in broadcast radio.

Your ticket for the: U2 – The Greatest Christian Band That Never Was

U2 – The Greatest Christian Band That Never Was